There Are Two Kinds of Categorization Researchers

Dual process accounts of cognition are ubiquitous. In fact the one thing you can count on is that there are two kinds of cognitive scientists: Those who think there are two systems and those who don’t.  My research has generally argued for the existence of two systems. Though the more I do research in this area the less convinced I am.

With that in mind, I really enjoyed reading this new paper from Mike Le Pelley and Ben Newell at UNSW and Rob Nosofsky at IU. They are commenting on an earlier paper by J. David Smith, Greg Ashby and colleagues. In this blog post, I’m going to review both of them, and argue that neither one of them gives us a complete picture.  Both are also missing a critical question.

Smith’s paper reported on an experiment in which they asked people to learn perceptual categories that either had a single dimensional rule, or a two-dimensional structure that could be learned without a rule. Subjects learned under one of two conditions. Either they received feedback immediately after making a classification,  or feedback was deferred and delivered after five trials in a row. 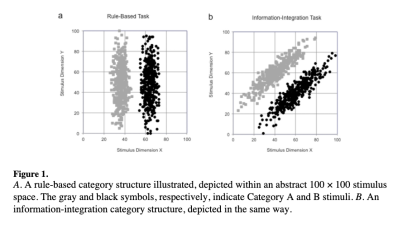 The actual images subjects saw were pixel displays that varied in size and density. The figure below shows the full range, and you can imagine that in the single dimensional case,  you would learn to categorize slightly larger things as belonging to one group and slightly smaller things as belonging to the other group, and you would ignore density. For the non rule defined (information integration) categories you would incorporate both size and density. To leann, you see a single stimulus in the screen and respond with Category A or B and then feedback (or not).  This continues for a few 100 trials

Smith and colleagues interpreted this as evidence for two systems that underlie the category learning process. One system relies on verbal working memory and is able to learn the rule defined structure. It’s not affected by the deferred feedback because subjects can hold the responses that they made in working memory until the feedback is delivered. But the diagonal case depends on the implicit associative learning system. This system relies heavily on a hypothesized dopaminergic learning system. In order for that to work, there needs to be a temporal proximity between stimulus, response, and feedback. When you disrupt that by deferring the feedback delivery you disrupt the learning process. Smith and colleagues argued this was one of the strongest associations in the literature.

I read this paper when it first came out and I agreed with them. I thought it was a terrific case.

Evidence against the multiple system approach

The new paper that was just published by Mike Le Pelley and colleagues argues that the dissociation is not as strong as it seems. Or rather, it doesn’t support the existence of two systems. According to their approach, all of the learning happens within the same system but the more cognitively demanding the task is, the more likely it is to rely on some of the executive functions, or working memory.  The single dimensional rule is fairly easy to learn and so it’s not affected by the deferred feedback intervention. The diagonal, information integration category set is more cognitively demanding and so it is affected by the deferred feedback intervention. They went one step further. They asked a group of subjects to learn a third category set. One that is cognitively demanding but one that can be learned by explicitly verbalizable rule. I have used a category set like this in the past, and also argue that it engages an explicit category learning system.

Le Pelley et al’s  three different category sets are shown below. On the left, the single dimensional vertical rule. In the middle, the diagonal rule, and on the right a two-dimensional conjunctive structure.

They asked their subjects to learn images that were single blue lines on the screen. These blue lines varied in length (which corresponded to the X axis on the plots above) and the angle of the line on the screen (which corresponded to the y-axis on the plot above) They also asked subjects to learn these in either the immediate feedback condition or the deferred feedback condition, the same as Smith and colleagues.

Their data are shown below. As you can see, the deferred feedback did not interfere with the single dimensional category set. Participants are performing well in both conditions and the majority of them are using a optimal linear boundary (the “best fitting model”). And just like Smith et al., they found that the deferred feedback condition interfered strongly with performance on the diagonal set. Performance was reduced and people were less likely to use the optimal diagonal boundary. 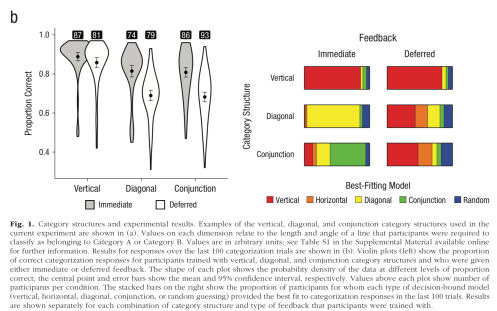 However there’s a twist: the deferred feedback also interfered with the conjunctive rule category set.  This undermines a multiple system approach. If subjects were learning these rule defined categories with an explicit verbal system that was not affected by the deferred feedback, performance on this categories that should not have been affected. but it was.  The figure shows that performance was reduced, and people were less likely to use the optimal two-dimensional conjunctive boundary when receiving deferred feedback. The main difference between that category set and the diagonal category set is that they are both complex two-dimensional complex structures.

Or as they write:

“These findings do not follow from Smith et al.’s multiple-systems account but follow naturally from a cognitive-demands account: The cognitive complexity and memory demands of diagonal and conjunction tasks are greater than for the vertical task, so deferring feedback will impair both two-dimensional tasks and may drive participants to a less-demanding unidimensional strategy.”

My impression is that these are both really well done studies. The original paper by Smith et al. tested a clear hypothesis of the multiple systems approach. They equated their category sets for complexity and difficulty and only interfered with the delivery of the feedback. And consistent with the procedural nature of the implicit system, only the non-rule defined set was affected. As well, this result is broadly consistent with research from my lab, Smith’s lab, Ashby’s lab, and many others.

But are do these data imply two separate systems? Although the complexity of the conceptual structure was equated in Smith’s design, the representations that were required to learn the category set were not. People learning the diagonal rule had to learn more than one dimension and when Le Pelley et al. asked participants to learn a two-dimensional rule described set, they found evidence of deferred feedback interference. That seems broadly inconsistent with the multiple systems approach.  When feedback was immediate, participants could learn the conjunctive role and they did so by primarily defending a two-dimensional conjunctive rule boundary. When the feedback was deferred, their performance was reduced and they lost access to the two-dimensional conjunctive rule.

However these aren’t really compatible studies in my view. Why?

These are not problems in and of themselves, but they do make it difficult to determine whether or not Le Pelley’s work is a clear or challenge to Smith’s work. It seems to be, but someone needs to run the exact same edition to see if Smith’s work is replicable. or the reverse, it might be worth looking at whether or not the pixel density rectangles allow for Le Pelley is work to be replicated.

One of the things I like best about Le Pelley’s work is that the data were collected online. and all of the data and modelling scripts are available and open. You can even look at an example of the study they ran and for yourself.  I hope to see more studies like this.  you may even see more studies like this from my lab. As we are designing some tasks that will work this way.

I said at the outset I thought that they’re missing an important part of the question.  One of the most interesting things to me is how and why participants adopt different strategies. In some cases, there is a clear and easy optimal rule. But often only 60% or 70% of the subjects find that rule. Why? And those that don’t find the rule often use another strategy, one that is suboptimal. Why and how to they choose? What individual difference, cognitive difference, or local variable allows you to predict whether or not participants will find the optimal boundary? I think that’s a really unexplored question. Neither of these two studies get at that, and that seems to be orthogonal to the multiple systems approach it strikes me as an area ripe for investigation.