Fact: I do not read enough of the literature any more. I don’t really read anything. I read manuscripts that I am reviewing, but that’s not really sufficient to stay abreast of the field. I assign readings for classes, to grad students, and trainees and we may discuss current trends. This is great for lab, but for me the effect is something like me saying to my lab “read this and tell me what happened”. And I read twitter.

But I always have a list of things I want to read. What better way to work through these papers than to blog about them, right?

So this the first instalment of “Paul’s Curated Reading List”. I’m going to focus on cognitive science approaches to categorization and classification behaviour. That is my primary field, and the one I most want to stay abreast of. In each instalment, I’ll pick a paper that was published in the last few months, a preprint, or a classic. I’ll read it, summarize it, and critique. I’m not looking to go after anyone or promote anyone. I just want to stay up to date. I’ll have a new instalment on a regular basis (once every other week, once a month, etc.). I’m doing this for me.

So without further introduction, here is Reading List Item #1…

This paper was published on line last fall but was just published officially in Feb of 2018. I came across it this morning and I was looking at the “Table of Contents” email from Memory & Cognition. Full disclosure, the first author was my grad advisor from 1995-2000, though we have’t collaborated since then (save for a chapter). He’s now at Georgia State and has done a lot of fascinating work on metacognition in non-human primates.

The article describes a single study on classification/category learning. The authors are working within a multiple systems approach of category learning. According to this framework, a verbally-mediated, explicit system learns categories by trying to abstract use a rule, and a procedurally-mediated, implicit system learns categories by Stimulus Response (S-R) association. Both systems have well-specified neural underpinnings. These two systems work together but sometimes they are in competition. I know this theory well and have published quite of few papers on the topic. So of course, I wanted to read this one.

A common paradigm in this field is to introduce a manipulation that is predicted to impair or enhance one of the systems and leave the other unharmed in order to create a behavioural dissociation. The interference in this paper was a 1-back feedback manipulation. In one condition, participants received feedback right after their decision and in another, they received feedback about their decision on the previous trial. Smith et al. reasoned that the feedback delay would disrupt the S-R learning mechanism of the procedural/implicit system, because it would interfere with the temporal congruity stimulus and response. It should have less of an effect on the explicit system, since learners can use working memory to verbalize the rule they used and the response they made.

In the experiment, Smith et al. taught people to classify a large set (480) of visual stimuli that varied along two perceptual dimensions into two categories. You get 480 trials, and on each trial you see shape, make a decision, get feedback, and see another shape, and so on. The stimuli themselves are rectangles that vary in terms of size (dimension 1) and pixel density (dimension two). The figure below shows examples of range. There was no fixed set of exemplars, but “each participant received his or her own sample of randomly selected category exemplars appropriate to the assigned task”.

They used a 2 by 2 design with two between-subject factors. The first factor was category set. Participants learned either a rule based category (RB) in which a single dimension (size or density) creates an easily-verbalized rule, or an information integration category (II) in which both dimensions need to be integrated at a pre decisional stage. This II category can’t be learned very easily by a verbal rule and many studies have suggested it’s being learned by the procedural system. The figure below shows how many hundreds of individual exemplars would be divided into two categories for each of the each of the category sets (RB and II). 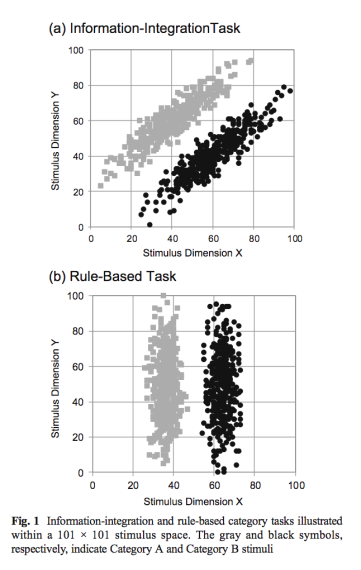 The second factor was feedback. After each decision, you either received feedback right after you made a decisions (0Back) or you received feedback one trial later (1Back). This creates a heavier task demand, so it should make it harder to learn the RB categories at first because the task creates a heavier working memory load. But it should interfere with II learning by the procedural system because the 1-Back disturbs the S-R association.

So what did they find? The learning data are plotted below and suggest that the 1Back feedback made it harder to learn the RB categories at first, and seemed to hurt the II categories at the end. The 3-way ANOVA (Category X Feedback X Block) provided evidence to that effect, but it’s not an overwhelming effect. Smith et al.’s decision to focus a follow up analysis on the final block was not very convincing. Essentially, they compared means and 95% CIs for the final block for each of the four cells and found that performance in the two RB conditions did not differ, but performance in the two II conditions did. Does that mean that the feedback was disrupting the feedback? I’m not sure. Maybe participants in that condition (II-1Back) were just getting weary of a very demanding task. A visual inspection of the data seems to support that alternative conclusion as well.  Exploring the linear trends might have been a stronger approach.

The second analysis was a bit more convincing. They fit each subject’s data with a rule model and an II model. Each model tried to account for each subject’s final 100 trials. This is pretty easy to do and you are just looking to see which model provides the most likely account of the data. You can then plot the best fitting model. For subjects who learned the RB category, the optimal rule should be the vertical partition and for the II category, the optimal model is the diagonal partition.

As seen the figure below, the feedback did not change the strategy very much for subjects who learned the RB categories. Panel (a) and (b) show that the best-fitting model was usually a rule based one (the vertical partition). The story is different for subjects learning II categories. First, there is way more variation in best fitting model. Second, very few subjects in the 1-back condition (d) show evidence of the using the optimal rule (the diagonal partition). 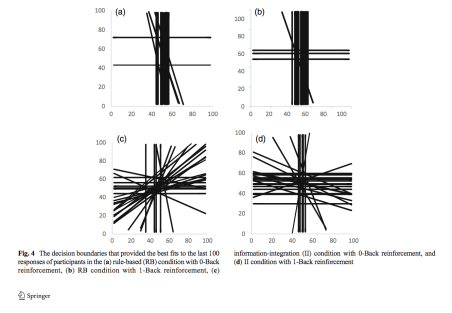 Smith et al concluded: “We predicted that 1-Back reinforcement would disable associative, reinforcement-driven learning and the II category-learning processes that depend on it. This disabling seems to have been complete” But that’s a strong conclusion. Too strong. Based on the modelling, the more measured conclusion seems to be that about 7-8 of the 30 subjects in the II-0Back condition learned the optimal rule (the diagonal) compared to about 1 subject in the II-1Back. Maybe a just handful of keener’s ended up in the II-0Back and learned the complex structure? It’s not easy to say. There is some evidence in favour of Smith et al’s conclusion but its not at all clear.

Tune in a few weeks for the next instalment. Follow my blog if you like and check the tag to see the full list. As the list grows, I may create a better structure for these, too.